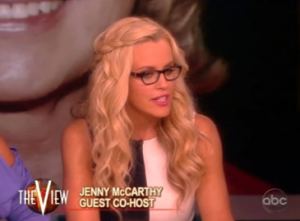 Centerfold-turned-anti-vaccine-crusader Jenny McCarthy is in talks to join “The View” as a co-host, according to a report in Us Weekly.

McCarthy, 40, has been a frequent guest co-host on the long-running daytime talk show and is rumored to be on deck to replace Joy Behar when she leaves next month.

According to an unnamed source in the magazine article, McCarthy, whose anemically rated talk show “The Jenny McCarthy Show” launched on VH1 earlier this year, is “a good fit” for the program.

McCarthy got her start as a Playboy playmate before seguing into a TV career on the mid-‘90s MTV dating show “Singled Out.” In recent years, she’s come under fire for her espousal of widely debunked theories linking childhood vaccines with autism, though at this point holding controversial opinions is practically a requirement for aspiring “View” co-hosts.

And she’s not the only model turned TV star said to be in the running for a permanent spot on the show: Brooke Shields is rumored to be replacing Elisabeth Hasselbeck, who has yet to confirm widespread reports of her impending departure later this year.

When asked for a comment, a representative of “The View” said only, “We have no announcement to make at this time.”