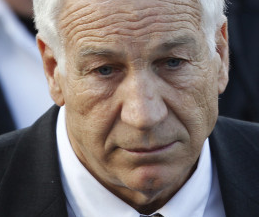 Jerry Sandusky, Penn State’s shamed former assistant football coach, is reportedly considering to sit down for another interview after the new year. The upcoming interview would include Sandusky’s wife, Dottie.

Sandusky, who has been charged with over 50 counts of serial sexual abuse against minors, was first interviewed over the phone by NBC’s Bob Costas. Costas had originally booked an interview with Sandusky’s lawyer, Joe Amendola, on Brian Williams’ new prime time newsmagazine show, “Rock Center With Brian Williams.” Just before the interview, Amendola reportedly asked Costas if he would like Sandusky to join by phone.

According to the Harrisburg Patriot-News, Amendola reportedly told The New York Times that Sandusky and his wife were considering sitting down for an interview together in early 2012. Amendola said that the Sanduskys were considering returning to NBC’s “Rock Center,” sitting down with Oprah, talking with ABC’s Barbara Walters, or appearing on CBS’ “60 Minutes.”

Amendola has appeared on NBC’s “Today” show since Sandusky spoke with NBC’s Bob Costas. Earlier this month, “Today” host Ann Curry asked Amendola if he was “competent” to serve as Sandusky’s lawyer.