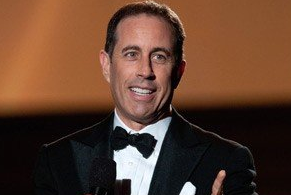 Jerry Seinfeld will be the first guest co-host on ‘Live! With Kelly’ when the show switches to a Regis Philbin-less format.

Philbin leaves ‘Live! With Regis and Kelly’ on Fri., Nov. 18 and the show will transition to ‘Live! With Kelly’ as it searches for a permanent co-host. A similar format was followed when Kathie Lee Gifford left the series in 2000.

“Jerry is a great friend of ours, and a friend of Kelly’s, and it doesn’t hurt that he’s an entertainment icon,” Michael Gelman, ‘Live!’ executive producer, said in a statement. “It’s a great way to kick off the new beginning of our show.”

Philbin is leaving the show after 28 years. However, he’s not retiring. The 80-year-old host recently called a radio show to set the record straight.

If he’s not retiring, then why is Philbin leaving ‘Live!’? Philbin hinted it was over contract troubles.

“The contractual issue just never worked out,” he said, “but I was going to leave before that anyway.”