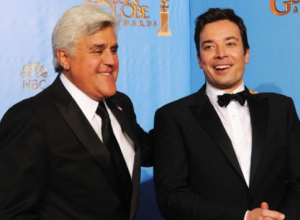 It’s official: Jimmy Fallon will take over “The Tonight Show” from Jay Leno.

As part of the switch, “The Tonight Show” will return to New York after four decades in Los Angeles.

Fallon declared, “I’m really excited to host a show that starts today instead of tomorrow.”

“Congratulations Jimmy,” Leno said in a statement. “I hope you’re as lucky as me and hold on to the job until you’re the old guy. If you need me, I’ll be at the garage.”