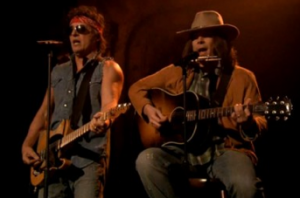 Jimmy Fallon is set to release his first album in a decade — and it’s loaded with famous collaborators.

“Blow Your Pants Off,” coming out on June 12, will contain new original music as well as some of the hugely popular “Late Night” musical comedy performances that have used both legendary recording artists and Fallon’s mimicry of rock icons.

Paul McCartney, Bruce Springsteen, Eddie Vedder and Fallon pal Justin Timberlake are some of the big names who will be featured.

He welcomes President Obama to his show on Tuesday.

No word yet on whether they’ll duet.