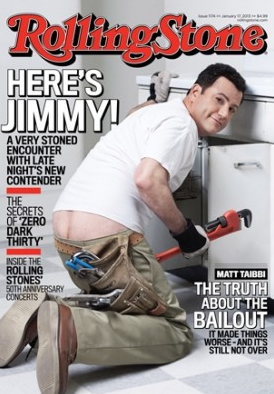 Jimmy Kimmel reveals a little more than usual in the new Rolling Stone, baring his butt crack on the magazine’s latest cover.

And while chatting with the reporter at his beach house, Kimmel had some help from his old friend Mary Jane.

“If we smoke weed right now,” Kimmel asked, “is that on the record?”

He continued, “I don’t know if I want this in the story. My kids are gonna read this.”

But that didn’t stop the TV personality from retrieving his stash (described as a baggie “bulging with buds the size of baby Brussels sprouts”) and lighting up.

The resulting interview can be found in the new issue of Rolling Stone, on newsstands Friday.