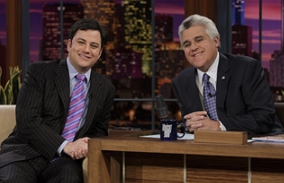 Like Howard Stern, Jimmy Kimmel is not the biggest fan of Jay Leno.

Asked about the “Tonight Show” host during a media panel in New York City on Monday night, Kimmel simply replied, “F**k him.”

The “Jimmy Kimmel Live” host, who’s now set to face off against Leno and David Letterman when his show moves to the 11:35 time slot on ABC this January, went on to say that the friendship he once had with Leno was “fake.”

Kimmel added the “most fun” he’s ever had on his show was when he famously impersonated Leno in 2010, right after Leno had wrestled the “Tonight Show” away from Conan O’Brien.

He also said that his “proudest moment” was when he used an appearance on Leno’s short-lived prime-time show the following night to throw the Conan incident in his face.

When Leno asked Kimmel during that interview what was the best prank he ever pulled, Kimmel responded, “I think the best prank I ever pulled was I told a guy that five years from now I’m going to give you my show, and then when the five years came, I gave it to him and then I took it back almost instantly!”

Kimmel concluded at the New York panel, “People, it turns out, really don’t like Jay Leno.”

David Letterman Says Rush Limbaugh “Is Back On Oxycontin”