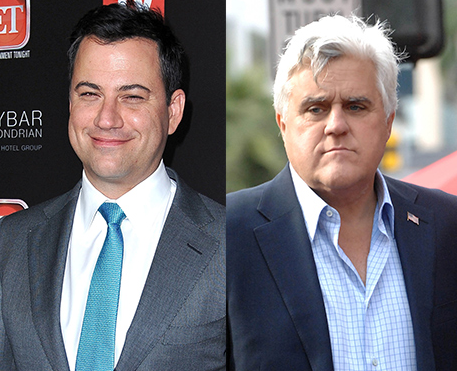 “As a comedian, you can’t not have disdain for what he’s done,” Kimmel, 45, tells the magazine, alluding to Leno’s storied history with late-night rivals David Letterman and Conan O’Brien. “He totally sold out. He was a master chef who opened a Burger King.”

The ABC host also quips that the NBC star “hasn’t been a good standup in 20 years.”

Last month, Leno, 62, came under fire from longtime foe Letterman, too. Talking with Oprah Winfrey about the decades-long feud between the two, which began when Leno was named Johnny Carson’s Tonight Show successor, the CBS host said he had “never met anyone quite like Jay” — and not in an altogether good way.

“I think he is the funniest guy I’ve ever known,” Letterman revealed in a clip from the Oprah’s Next Chapter interview, airing Jan. 6. “Therefore, the fact that he is also maybe the most insecure person I have ever known…I could never reconcile that.”

The Jan. 17 issue of Rolling Stone is on stands now.