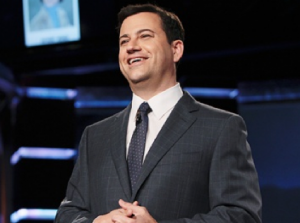 The comedian and host of ABC’s Jimmy Kimmel Live! will host the 64th annual Primetime Emmy Awards, set to air Sept. 23 on ABC. He takes over the role from Glee’s Jane Lynch, who hosted last year’s kudofest on Fox, a network without an obvious late-night choice to put at the podium. The year prior, NBC slotted in its still-green late-night host Jimmy Fallon.

“I hope to be able to do for the Emmys this year what Eddie Murphy did for the Oscars,” Kimmel joked, in a nod to the debacle in which Murphy pulled out of hosting this year’s Oscars after Brett Ratner, the producer who had selected him, left the show after making an anti-gay remark that was caught on tape.

Don Mischer will exec produce the Emmys for a 12th time. The awards show again will take place at the Nokia Theatre in Los Angeles.

Kimmel is no stranger to awards shows, having hosted the ESPYs, American Music Awards and ABC’s long-running After-Oscar special. During the course of his show’s decade-long run, he has appeared annually at ABC’s upfront presentation to advertisers to poke fun at all facets of the television industry, from the networks to its stars. Next month, he will emcee the White House Correspondents’ Association Dinner in Washington.