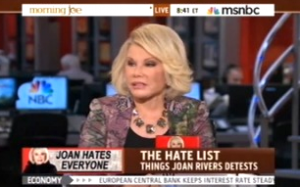 Joan Rivers stopped by Morning Joe on Thursday to promote her new book, the wonderfully-titled I Hate Everyone, Starting with Me. The comedian took some time, as comedians are wont to do, to discuss a list of things she hates — a list that includes host Mika Brzezinski.

“Do you really hate yourself?” Brzezinski wanted to know.

“Oh, of course,” said Rivers. “Anyone that doesn’t understand how stupid they are… no room in my life.”

Later, things got real, as they say (?), when Brzezinski asked whether her sweater looked ok.

“Ok for a serious person,” responded Rivers. “I wouldn’t send you on the red carpet.” She added that the host had a “very good body.” When Brzezinski revealed that she’s 45, Rivers informed her that “from now on, you are 39.”

When Willie Geist pointed out that Rivers had just noted Mika is thin, yet writes in her book that she hates thin people, Rivers dryly responded that “I didn’t say I liked Mika.”

“I hate thin people,” she continued. “And they smell of vomit.”

“Thin, pretty, blond, great eyes. Screw you,” she told the host. “Are you Christian? You got it all. She’s got it all. Now you are set for the whole day.”

She also shared that, speaking of fat people, “Mike Bloomberg is wrong” when it comes to his sugary drink ban.