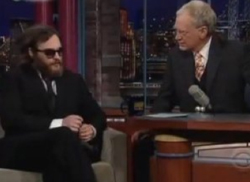 The CBS show said Monday that Phoenix was booked to appear on the “Late Show” on Sept. 22. A documentary on Phoenix’s attempt to become a hip-hop musician, directed by Casey Affleck, was released this month.

Phoenix’s odd guest turn with Letterman in February 2009 was punctuated by uncomfortable silence and Letterman’s request that the bearded Phoenix “tell us about your days with the Unabomber.”

It drew about 8 million online views on YouTube and the CBS website. Letterman will replay that show Thursday.