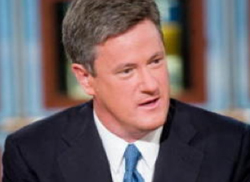 MSNBC has suspended “Morning Joe” host Joe Scarborough for the same violation that took Keith Olbermann off the air earlier this month.

In a statement, MSNBC President Phil Griffin said he has suspended Scarborough for making political donations to candidates in Florida without seeking prior approval:

This morning Joe Scarborough informed me that he made eight contributions of $500 each to local candidates in Florida between 2004-08. In my conversation with Joe two weeks ago, he did not recall these contributions. Since he did not seek or receive prior approval for these contributions, Joe understands that I will be suspending him for violating our policy. He will be immediately suspended for two days without pay and will return to the air on Wednesday, November 24th. As Joe recognizes, it is critical that we enforce our standards and policies.

Under NBC News policy, employees must seek prior approval if making political donations.

Scarborough apologized in a public statement, saying, “I recognize that I have a responsibility to honor the guidelines and conditions of my employment, and I regret that I failed to do so in this matter.”