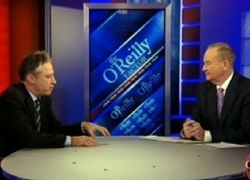 While the two may be on opposite ends of the political spectrum, there are no enemies when you have a book to promote. In this case, Stewart will be hawking his latest effort — “Earth (The Book)” — on O’Reilly’s show on Sept. 22.

Since O’Reilly is giving Stewart access to his audience to promote his book, Stewart will return the favor. According to O’Reilly’s website, Stewart will have the Fox News host on “The Daily Show” on Sept. 27.