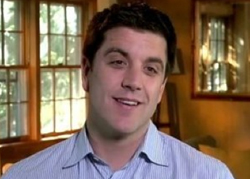 Josh Elliott, who just started his new role as newsreader for “Good Morning America,” may be a familiar face to ESPN viewers, but ABC News took some time to introduce him to the wider public on Wednesday’s “GMA.”

Among other things, we learn that Elliott was an enormous baby–his mother compares him to an inflated basketball. “GMA” also showed lots of pictures of Elliott, from his days as a teenage sports fanatic up to the present, and touched on his devotion to his young daughter.

Amy Poehler and Sherri Shepherd Do the ‘Dougie’