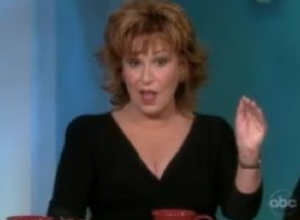 Joy Behar isn’t saying a peep about her wedding to Steve Janowitz until “The View” returns on September 6, according to the New York Post.

Behar shocked everyone when she married Janowitz, her long-time boyfriend whom she frequently mentions on the show, in August. She had previously sworn off marriage, and broke off her engagement to him in 2009.

The Post reports that when asked about the ceremony, Behar was overheard joking, ““I can’t say anything or Barbara [Walters] will kill me.” Behar and co-host Sherri Shepard, whose much talked about nuptials took place two days later, will both discuss the details of their weddings on the premiere of the program’s fifteenth season.

The day after her wedding, Behar simply tweeted, “Gone fishing.”

A spokeperson for Behar told Access Hollywood that Behar was on her honeymoon in the days after the wedding. She was spotted in the Hamptons with Janowitz and her daughter on Sunday.