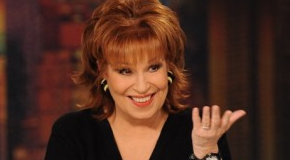 On Monday Barbara Walters returned to her rightful seat behind the table on “The View,” joining Whoopi Goldberg, Joy Behar, Elisabeth Hasselbeck and Sherri Shephard.

On “ABC World News” last night, it was revealed that Joy Behar–the longest-running cast member outside of Walters–would be departing.

“And this just in, our friend Joy Behar has announced that she will be leaving ‘The View’ at the end of the season,” Diane Sawyer said. “After 16 and a half years alongside Barbara Walters and the gang she says “it seemed like the right time to move on.”

Behar has been with the show since 1997, and has also doubled as a cable news regular. She had a program on HLN for years, and moved to Current TV after parting ways with HLN. Her future at Current is unclear, with Al Jazeera set to change the channel to Al Jazeera America in the coming months.