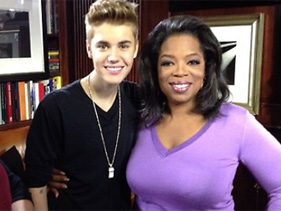 In an interview that was taped weeks before the Justin Bieber and Selena Gomez drama, Bieber sat down with Oprah on her show “Oprah’s Next Chapter,” and spoke about numerous topics, one of them being Gomez:

“I feel like she’s one of the most genuine people. She just has a good heart. I can talk to her about everything.”

Bieber, in a desperate attempt to prove to the world that he is not a 14 year old, spoke to Oprah about wanting to be married by the age of 25.

““We’ll see when I get there. I’m not there yet,” Bieber said, referring to the fact that he has not reached puberty yet.

Oprah, after giving out Bieber’s new fragrance ‘Girlfriend’ to her audience members, and then realizing there wasn’t an audience, listened to the Biebs talk about how depressed he gets sometimes.

“…but I get days where I’m just down and gloomy, just because I’m human.” Bieber continued with, “There’s a lot of people who are just waiting for me to mess up because a lot of teen stars do.”

While wearing overalls to meet the Prime Minster of Canada, or releasing a fragrance that will soon be lost in the dusty shelves of Kohls, may be considered slight slip ups, it will be interesting to see how Bieber progresses in his career as he gets older and finally grows a mustache.