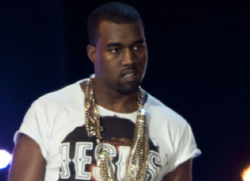 Kanye West has backed out of a scheduled performance on NBC’s “Today” show after getting upset with how his interview with host Matt Lauer this week was handled. West’s record company confirmed the cancellation to “Today” on Friday after the rapper said on his Twitter account that he wouldn’t perform. He was scheduled to appear Nov. 26, part of a promotion drive for his new disc, “My Beautiful Dark Twisted Fantasy,” which is being released Nov. 22.

During the interview, which was taped Tuesday and aired Thursday, West appeared thrown when “Today” aired a video clip of an embarrassing moment – when he grabbed a microphone from Taylor Swift at the 2009 MTV Video Music Awards and said Beyonce should have won an award instead of Swift.

West tweeted this week that he felt “set up” by the interview and that Lauer tried to force his answers. His cancellation notice was accompanied by mixed messages.

“Much love to Matt and the whole Today show,” he said in a Twitter message. “I accept ya’ll future apology in advance LOL!”

Joy Challenges Sarah Palin to Appear on “The View”