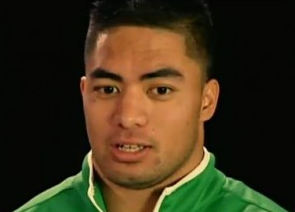 Manti Te’o has granted his first on-camera interview following revelations of a hoax involving a fake girlfriend to ABC’s Katie Couric. The interview will air on Couric’s syndicated show “Katie” on Thursday with previews airing on all ABC News programs.

Couric will sit down with Te’o and his parents, Brian and Ottilia Te’o, who are speaking out for the first time and say they were also victims of the hoax.

In an off-camera interview with ESPN’s Jeremy Schaap Friday, Te’o reiterated that he’s the greatest victim of the hoax, while admitting he’d made mistakes, including telling his father he met “Lennay Kekua.”

Given that the interview is for Couric’s show, but that she also contributes to ABC News, one might wonder if Te’o and his family were paid for their appearance. ABC News tells us no money changed hands. Couric’s PR man Matthew Hiltzik was hired by the Te’o family in recent days.

The Te’o interview comes a week after Oprah Winfrey got a big “get” in Lance Armstrong for her network, OWN.

Drew Barrymore Talks About Her Wild Past