After a closely watched migration from CBS to ABC last June, Katie Couric makes her ABC News debut with a wide-ranging interview with actress Sarah Jessica Parker to air Tuesday on Nightline.

The interview is hooked to Parker’s new movie, the Working Girl-esque comedy I Don’t Know How She Does It costarring Greg Kinnear and Pierce Brosnan. Couric also talks to the actress about motherhood. Parker has three children with husband Matthew Borderick; two-year-old twin daughters (delivered by a surrogate) and a son James, 8.

“They’re the source of my joy,” she says.

And the interview veers into a discussion about the snarky tone of today’s media, something that Couric has also been on the receiving end of.

“I think the things that are more painful to me are not the intrusion of paparazzi, it’s the lack of civility that I find more intimidating and far more painful an experience,” Parker says. “It’s the lack of critical thinking. It’s the endless snarky, mean way we talk about each other, we approach each other. The anonymity of being cruel, the delight in tearing people down. The tabloid era that we find ourselves in is a cultural boneyard, and that is painful to me.” 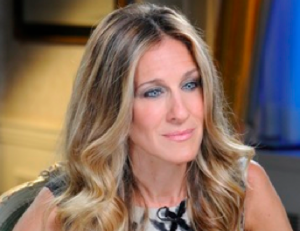 The interview is something of a soft-launch for Couric, who officially joined ABC News last June as what division president Ben Sherwood described as “the ultimate utility player.” The news division perch allows Couric to keep her hand in TV news — and her face on television — while she develops her syndicated daytime talk show at Disney/ABC Television Group. Since the announcement, she’s appeared as a guest host on Barbara Walters’ The View. And she’ll also contribute to ABC News’ coverage of the upcoming tenth anniversary of the terrorist attacks of September 11, 2001.

The title of her new show, Katie, and the first print promo featuring the anchor in a pale pink sweater with the tagline: “The opportunity begins Sept. 8,” was revealed last month.