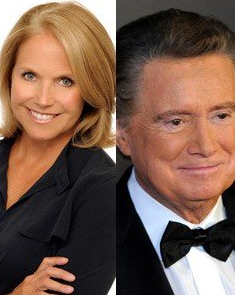 Regis Philbin will make his exit from ‘Live! With Regis and Kelly’ on Fri., Nov. 18, but not before sitting down with Katie Couric for a new special about his career.

According to Variety, Couric, ABC’s newest addition, will chat with the 80-year-old veteran host on Nov. 17, 8PM ET in a special tentatively titled ‘Katie Couric With a Regis Philbin Biography.’ The date may change.

The Philbin interview will be one of Couric’s first sitdowns since she left CBS for ABC. Couric has previously co-hosted ‘Live!’ and ‘The View’ for ABC. She’s also sat down with Sarah Jessica Parker for ‘Nightline.’

With the interviewing airing on ABC, we can’t help but assume there won’t be a lot of talk about the contract issue that reportedly pushed Philbin off the long-running morning show. When Philbin recently called a radio show, the radio host took him to task about why he’s leaving the morning program. Philbin hinted it was because of a contract dispute.

“The contractual issue just never worked out,” he said, “but I was going to leave before that anyway.”

Phiblin is leaving ‘Live! With Regis and Kelly’ after 28 years with the program, but he’s not retiring from show business.