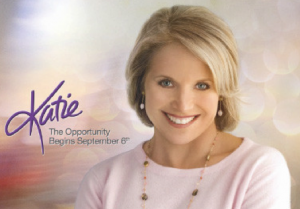 The website notes that former NBC Universal CEO Jeff Zucker, who will produce Couric’s new program, had hinted at the name in June. Zucker, who has otherwise remained quiet about other details surrounding the show, had suggested that Katie denoted a unique brand in television, saying, “The mere fact that you can just say Katie and know who we are talking about is evidence of that.”

Couric will follow in the footsteps of other talk show hosts with programs whose titles bear their first names, including Anderson Cooper, Ellen DeGeneres and — last but not least — Oprah.

The site reports that Disney and ABC are getting marketing materials ready in preparing for selling advertisers and stations on the show. One of the posters features Couric in a pink sweater against a blurry pink and purple backdrop.

The former CBS News anchor signed on for a syndicated daytime show with the network after stepping down from her position as the anchor of “CBS Evening News” in June.