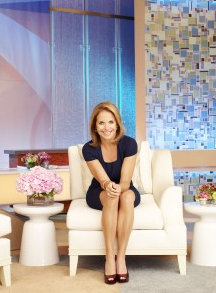 Katie” will be celebrating ‘Women Who Are Reinventing Themselves’ her first month on the air. Joining her in the first three weeks of the show will be some amazing celebrities including a rare television appearance by Barbra Streisand, Sheryl Crow, Chelsea Handler, E L James, Heidi Klum, Jennifer Lopez, Demi Lovato, Susan Sarandon, Jessica Simpson, Sofia Vergara and Wendy Williams.

Barbra Streisand will make a rare television appearance to discuss her passion — women and heart disease — as well as her return to Brooklyn for her first performance there in more than 50 years. Katie will also be joined by Jennifer Lopez, who will talk about her own “new beginnings,” including life after “American Idol,” life after divorce, and her stunning career reincarnation that has landed her at the top of the Forbes Celebrity 100 list. And Katie will also explore the theme of “new beginnings” with Heidi Klum, the host of “Project Runway,” actress Susan Sarandon, late night talk show host and author Chelsea Handler, and Sofia Vergara, the dynamic and always charismatic star of “Modern Family,” who will come by on the day her prime time program returns for the fall season.

Kicking off the sure to be hit show will be an interview with TV personality and fashion designer Jessica Simpson.