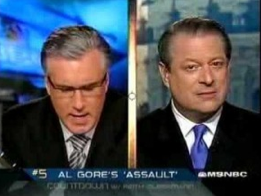 Soon-to-be ESPN2 host Keith Olbermann is the subject of a lengthy profile by THR’s Marisa Guthrie. Olbermann talks about how he came to join ESPN, repairing the bridges he “napalmed” the last time he was there, and also his rather tumultuous end at Current TV.

Guthrie also reveals that ESPN was talking to NBC’s Seth Meyers about hosting a late-night show, until he inked the “Late Night” gig at NBC, and that Olbermann met with ABC News president Ben Sherwood as his time at Current neared a close.

Then there are his comments on his former boss, Vice President Al Gore. THR teases it right at the top of the story, “there is name-calling.”

“When you’re working for somebody whom you admired politically, who turns out to be a clod,” says Olbermann, referring to Gore, “the scales fall from your eyes. Sorry. Al underdelivered. I mean that’s just simply the case. I don’t want to dwell on it, but it’s true.”