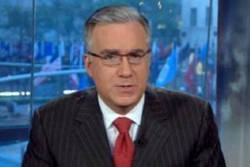 Keith Olbermann is anything but hesitant when it comes to a battle with Fox News, and the MSNBC anchor took to Twitter Wednesday to share his views on the TV network he probably wouldn’t even call a rival.

“I don’t have as much hate or as many lies in me as O’Reilly,” he tweeted.

One Twitter user, William R. Dickson, tweeted back at Olbermann with the following, which he retweeted to his 169,000-plus followers:

“Surely not 100%. Surely it is a rich blend of manure from a wide variety of farm animals.”