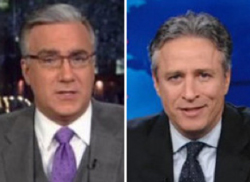 Keith Olbermann took to Twitter to criticize Jon Stewart for his lambasting of cable news and the media during his “Rally To Restore Sanity.”

Cable news was a common target for both Jon Stewart and Stephen Colbert during the rally; they both played several montages of anchors and pundits on both sides of the political aisle — including Olbermann — engaged in what they described as extreme or fear-mongering rhetoric. During his closing speech, Stewart homed in on the press, saying that the media was a key factor in poisoning the current political climate:

In response, Olbermann — whom Stewart has criticized many times in the past for what he sees as his over-the-top rhetoric — tweeted his disapproval of this sentiment: