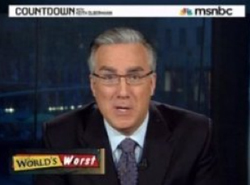 MSNBC has suspended star anchor Keith Olbermann following the news that he had donated to three Democratic candidates this election cycle.

“I became aware of Keith’s political contributions late last night. Mindful of NBC News policy and standards, I have suspended him indefinitely without pay,” MSNBC president Phil Griffin said in a statement.

Politico reported Friday that Olbermann had donated $2,400 each to Reps. Raul Grijalva and Gabrielle Giffords of Arizona, and to Kentucky Senate contender Jack Conway. While NBC News policy does not prohibit employees from donating to political candidates, it requires them to obtain prior approval from NBC News executives before doing so.

In a statement earlier Friday, Olbermann defended his donation, saying, “I did not privately or publicly encourage anyone else to donate to these campaigns nor to any others in this election or any previous ones, nor have I previously donated to any political campaign at any level.”

Griffin’s statement underscores that it was Olbermann’s failure to obtain approval, and not the actual political donations, that prompted the suspension.

The move is doubly significant in that it represents a major development in the relationship between Griffin and Olbermann, who once told the New Yorker, “Phil thinks he’s my boss.”