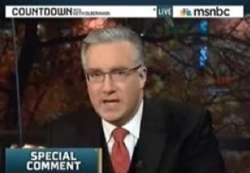 Keith Olbermann is apologizing to his fans — but not NBC News — for the “unnecessary drama” surrounding his two-day suspension for making political donations.

Olbermann is due to return to work Tuesday night on MSNBC’s “Countdown” show. In a statement issued Monday, he says he wanted to apologize to viewers “for having precipitated such anxiety and unnecessary drama.”

He was suspended for donating money to three Democratic candidates in violation of NBC News rules. Olbermann says it was an inconsistently applied rule that he had known nothing about before making the donations. He says he was suspended without a hearing after being told that no suspension was contemplated.

Liberal groups had taken on Olbermann’s suspension as a cause. An online petition calling for his reinstatement, run by the Progressive Change Campaign Committee, had exceeded 300,000 signatures Sunday, and Michael Moore had tweeted his support. The committee’s Adam Green said Griffin was repeatedly e-mailed updates on the petition drives.

“Progressives proved that when one of our own are targeted, we will have their backs,” he said.