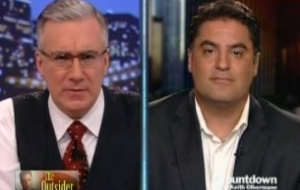 The fallout from Current TV’s firing of Countdown host Keith Olbermann was bound to get ugly, but one particular section of Olbermann’s lawsuit against Current is particularly unfortunate. In the suit, Olbermann trashes longtime booster Cenk Uygur, alleging that he opposed hiring The Young Turks‘ host, and then refused to promote TYT because “It Was Demonstrably Substandard.”

The suit goes on to allege that Olbermann refused to participate in The Young Turks’ premier, repeating the same slam, adding that it was “reasonable for Olbermann to decline to be associated with a host with a questionable journalistic standard and a show that was not up to the standards expected by the ‘Countdown’ audience.” Olbermann also refused to appear in promotional materials featuring his fellow Current hosts because they were, in his opinion, “low-quality programming.”