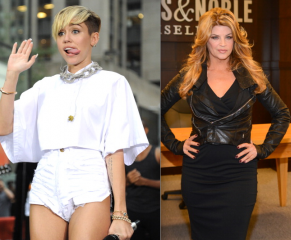 Kirstie Alley is praising Miley Cyrus after the singer dissed Matt Lauer during her “Today Show” interview on Monday.

As Gossip Cop previously reported, Cyrus told Lauer he was “definitely not sexual” after the host asked her whether her racy new act was just “a phase.”

Alley took to Twitter to applaud the way Cyrus handled Lauer and to criticize the reporter’s interviewing style.

The “Fat Actress” star tweeted, “God I love @MileyCyrus !! Matt Lauer tryin to trip her up on Today Show… she ain’t buyin it.”

Alley added, “When morning show hosts ask the ‘hard questions’ it simply means ‘Im gonna be an a**hole now to try & make U look like a fool.’ U the Fools.”

The star went on to say that Cyrus calling Lauer asexual “cracked me up,” telling followers, “he deserved it for trying to introvert her… Snap.”

She then wrote, “have all u old F’s forgotten what it looks & feels like to be YOUNG? Stop actin like U didnt get turned on by Elvis air grinding his ween.”