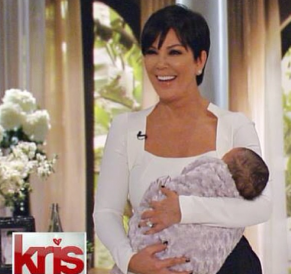 Kris Jenner fooled her talk show audience with a decoy baby during Monday’s premiere of “Kris.”

At the end of the episode, the new talk show host walked out with what looked like it could be 1-month-old North West (see photo right).

In actuality, the little one belonged to her stylist Monica.

“I couldn’t do that to Kim. That would be kidnapping,” Jenner told the disappointed audience, adding that daughter Kim Kardashian would debut North “on her own time.”

But the Kardashian family matriarch did share brand-new details of the baby girl’s birth, which she confirmed was five weeks early.

Jenner recounted being in the midst of early Father’s Day prep — with Kim planning to surprise dad-to-be Kanye West with his idol, Steve Wozniak — when she received an “urgent” text from Kim, saying she was having a “medical emergency,” and the baby had to be delivered that day.

Jenner abandoned her plans, quickly arranged for a decoy car, and headed to a hotel with Kim to make the secret switch.

Then, after some serious sneaking around to get into the hospital, “we had a baby,” Jenner revealed.

And who was in the hospital room with the family?

None other than Wozniak himself!

Jenner also shot down rumors that she’s forbidden Kim from leaving the house, and that she and Kanye are set to wed in Egypt.