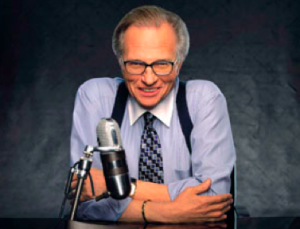 Former CNN host and current ora.tv host Larry King participated in an “IamA” on Reddit. IamAs feature guests (sometimes celebrities, often ordinary people) answering crowd-sourced questions from the Reddit community. Unlike some past participants, King seemed game to answer questions about anything and everything.

1: Where do you get those suspenders?

2: Why is CNN tanking when it used to be the de facto place to get news?

3: Do you believe Fox is really as bad as they are portrayed?

A 2: I wouldn’t call it tanking. We’re in a very vitriolic time in this country. So channels like Fox and MSNBC with a POV attract followers. It’s hard for CNN to stay in the middle. When big stories break they get a large audience and they make a lot of money. I watch them, next to ESPN they would be my channel of record.

A 3: They do what they do well. I don’t think they are as fair or balanced as they claim, but for what they do, they do it well.

Q: Hey Larry! I just wanted to know your opinion of the new HBO series the Newsroom, do people really talk that fast in real life?

A: I like Piers personally. We work very differently. He tends to ask longer questions and involves his opinions more than I did. But that’s more a question of style. I think he’s very bright and I get along with him very well. I wish they were doing better.

With regards to controversial guests: King said that Fidel Castro is the opne person he never got to interview but has wanted to, and that Iran’s president Mahmoud Ahmadinejad was “very pleasant” and that he hit it off with Watergate burglar G. Gordon Liddy “I like him and have kept in touch,” King said.