Larry King: Piers Morgan “May Have Been Oversold” 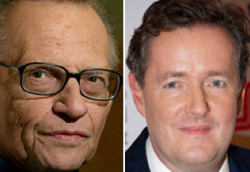 Larry King told a BBC radio show on Thursday that his successor, Piers Morgan, “may have been oversold” by CNN as a new, edgy type of broadcaster.

Speaking to BBC Radio 4’s “PM,” King was asked about the ratings for “Piers Morgan Tonight.”

“One of the problems they did was oversell it,” King said. “He was going to be dangerous, he’s going to be water-cooler talk. ‘Wait ’till you see me. I’m different.’ He’s good! he’s not that dangerous.”

The network would have been better off “starting quieter,” he added.

King then damned Morgan with some faint praise, calling him “not bad” and “certainly an acceptable host,” and saying that he liked Morgan personally.

“He may have been oversold…I wouldn’t say this is a bad show,” he concluded.

Larry King: Piers Morgan “May Have Been Oversold”