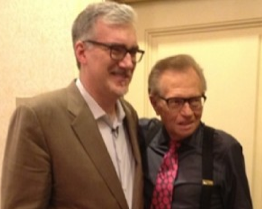 Former CNN host Larry King will be able to add yet another line on his resume next month: ESPN host. King will be filling in for Keith Olbermann on his 11 PM show on ESPN 2 next Tuesday, Wednesday and Thursday.

Olbermann will be covering the Major League Baseball playoffs for TBS during that time. King will be a guest on Friday’s edition of the program as well.

“I am a great admirer of Keith Olbermann who I think is the quintessential sports host,” said King in a statement. “Sports have always been my avocation – they’re part of my being. Having the chance to come back to my hometown of New York and host Keith’s show for several days is a terrific joy for me and a return to my first love.”

Other guest-hosts during Olbermann’s absence will include Jeremy Schaap and Colin Cowherd.

King is a noted sports fan, particularly of baseball, which will surely be one of the big sports stories of the day when he guest-hosts. After he left CNN, King pitched MLB Network on a new show, where he could serve as “Bob Costas West.”