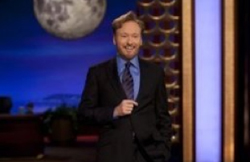 The late-night television landscape used to be fairly easy to describe: There was Jay Leno, David Letterman and everybody else.

Now, it just seems, there’s everybody else.

Late-night TV is losing audience and influence just as the time period has a breadth and quality of material it has never before had, with Conan O’Brien’s TBS show that started this month the latest example.

Leno and Letterman, both in the twilight of their television careers, are still the most popular performers. But O’Brien, Jon Stewart, Stephen Colbert, Jimmy Kimmel, Craig Ferguson, Jimmy Fallon, George Lopez and Chelsea Handler all have rabid fan bases.

“There are a lot of viable options out there,” said David Campanelli, vice president and director of national television for Horizon Media, who purchases TV advertising time for clients. “I don’t have to go to one or two places to spend my late-night money.”

NBC’s Leno topped the ratings for 14 years before NBC replaced him at the “Tonight” show in 2009 with O’Brien, and sent Leno into prime time. The move proved disastrous, and Leno was back in his old job within a year.

Leno immediately reclaimed the top spot in the ratings from Letterman. But this fall the competition between the two has been tight.

Leno has averaged 3.7 million viewers a night through eight weeks of the season, the Nielsen Co. said. Letterman is right behind at 3.6 million. Leno has been on top six of the eight weeks. Since two autumns ago when they went head-to-head, Leno’s audience is down 23 percent while Letterman is up 3 percent.

What happened to Leno’s fans? There may be some lingering bad feelings among viewers over O’Brien’s exit, when Leno was criticized for taking back a job he never really wanted to leave in the first place. Maybe casual fans simply got out of the habit of watching “Tonight” during Leno’s absence. NBC’s prime-time struggles may have finally caught up with him. It is likely a combination of all three.

“No one sees Leno as the big player anymore – the one show you have to be on,” Campanelli said. “‘The Tonight Show’ used to be the one you had to be on.”

Leno’s struggles leave Letterman in a position to take over the lead, even though his audience is getting smaller, too – just not as fast as Leno’s. Letterman lost the bump he received when competing against O’Brien on the “Tonight” show, and he’s down 16 percent since last fall.

“The moment that Dave felt that he could no longer beat Jay Leno, that’s when he started to gain on him,” said Aaron Barnhart, a late-night TV expert and founder of the TV Barn website. “It’s very possible he’s going to do a victory lap before he goes off into the sunset.”

Letterman is 63, Leno is 60. Their audiences, besides becoming smaller, are older and less valuable to advertisers.

O’Brien already looks more comfortable on TBS than he ever did on the “Tonight” show. He had 4.1 million viewers for his first night on TBS, following heavy promotion.

“We were blown away by the numbers the first night,” said Michael Wright, TBS programming chief. “But nobody got back and said this was going to be the audience (moving forward). It just doesn’t work out that way.”

O’Brien averaged 2.9 million viewers the first week, and was at 1.8 million the first three nights of last week, Nielsen said. Wright said TBS anticipated O’Brien would attract viewers with an average age in their late 30s, and instead it’s been about 10 years younger. TBS is thrilled about that demographic; the same young audience at “Tonight” made NBC nervous.

O’Brien’s show cut into the ratings for one direct competitor: Stewart at Comedy Central’s “The Daily Show.” It has been averaging 2 million viewers a night this fall, but was down to 1.4 million on O’Brien’s first week, Nielsen said. Colbert’s audience on O’Brien’s first week was 300,000 less than the season average.

Michele Ganeless, Comedy Central president, said some reduction in audience size for their shows was to be expected given that the midterm elections were over. With O’Brien in the mix, there’s evidence that more people are saving the Comedy Central shows on their digital video recorders, she said.

“What Jon and Stephen do is so unique and unparalleled, and so different from what Conan does that there really is room for all of them to succeed,” Ganeless said.

Stewart and Colbert do lead in buzz – the watercooler moments that are hard to measure but make them more influential than their audience size would suggest.

Many of the other contenders are bunched up in the ratings so far this season, each with his own audiences and constituencies. Ferguson is averaging 1.8 million viewers following Letterman on CBS, and Fallon has 1.7 million after Leno on NBC. ABC’s Kimmel also averages 1.7 million, and has been getting strong word-of-mouth. Even though he moved back an hour, Lopez averaged 1.1 million viewers for the first week he followed O’Brien on TBS. Handler on E! Entertainment’s “Chelsea Lately” gets just under 1 million.

The late-night talent is an abundance of riches that some in the industry quietly believe will never happen again. Within that group could be Leno and Letterman’s replacements. But will it matter?

They all compete against a force that’s only going to get stronger: Viewers watching not live shows but programs they have recorded earlier on DVRs. Shows may also have to confront the issue of fans not watching because they can easily follow highlights online the next day.

Late-night is no longer the easy source of advertising revenue, and when the old stalwarts leave, the 12:30 shows could be in danger.