LIndsay Lohan’s Dad Books Her on The Late Show, She Refuses 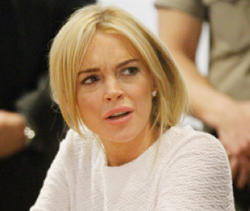 Lindsay Lohan’s father, Michael, has admitted that he was the “friend” who booked Lohan on “The Late Show,” and claims that she was aware and ready to do it — until her representatives found out and put the brakes on the whole thing.

CBS announced on Tuesday that troubled star Lindsay Lohan would appear on “The Late Show” on Thursday to read the nightly Top Ten list, recanted on Wednesday, saying that Lohan would not be making the appearance — because she had never agreed to it in the first place.

Last night, Lohan tweeted: “I am NOT going to be doing David Letterman, I’m not sure how this happened, but I am sorry for the confusion …”

A statement put out by the network explained that they had been told by someone claiming to be a friend of Lohan that she wanted to do the show, a promise that person was not authorized to make.

“Lindsay Lohan will not be delivering a Top Ten list on Thursday’s LATE SHOW with DAVID LETTERMAN, as had been previously announced. We made a mistake. Someone purporting to be a friend of Lindsay’s reached out to the show yesterday, allegedly on her behalf, and booked her to appear. Clearly, this person was not authorized to make commitments on her behalf. We wish Lindsay well, and look forward to having her on the show in the future.”

LIndsay Lohan’s Dad Books Her on The Late Show, She Refuses