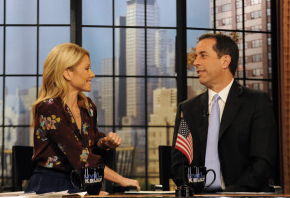 A couple of months after 80-year-old Regis Philbin exited “Live! With Regis and Kelly” and took his name in the title along with him, Kelly Ripa has been welcoming a succession of fill-in co-hosts. A number of them — no one’s saying just who — are auditioning on-the-air to land the job for keeps.

It’s a process that Gelman, the show’s executive producer, calls dating, and, as fans wait for the show to pop the question weeks or months from now, “Live!” is sowing its wild oats. (“Live! With Kelly,” which airs in syndication weekdays at 9 a.m. EST in many markets, this week will feature guest co-hosts Daniel Radcliffe, Howie Mandel, Peter Facinelli and D.L. Hughley).

“We’ve just scratched the surface of people out there,” executive produce Michael Gelman says, adding, “We have enjoyed a lot of people who have already co-hosted, and we’re bringing a bunch of them back for more ‘dates.'”

That first batch of callbacks will include Jerry O’Connell, Dana Carvey, Seth Meyers and Michael Strahan.

“But I’m not saying there’s a short list,” insists Gelman. “Every day we come up with new ideas, and we get new revelations about who the new host should or shouldn’t be. The chemistry is key — and not just with Kelly, but with the audience and the staff and the format.”