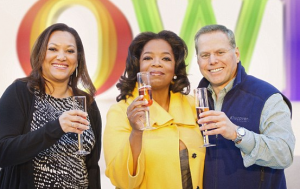 The losses at Oprah Winfrey’s troubled cable channel are approaching a staggering $330 million, according to a report over the weekend.

Industry insiders believe the channel – the Oprah Winfrey network (OWN) – will not last another year unless they come up with a hit show and make a dramatic turnaround.

Though ratings have seen a slight insurgence thanks to interview program Oprah’s Next Chapter, it has stumbled since the get go with ratings of just 308,000 daily.

It is believed shows which do not feature the chat show queen herself are not popular with viewers.

Discovery, which partnered with Winfrey to launch the network and has been underwriting its costs, has invested nearly $600 million in it since 2008, according to an extensive report in Businessweek magazine.

Since it started on the air in January 2011, it may have lost as much as $330million, according to the magazine.

David Zaslav, the chief executive officer of Discovery Communications who talked Oprah into the idea of OWN, is famously impatient with money-losing operations within his company and insiders say he will not put up with the aiing network’s losses for much longer.

Winfrey appeared before advertisers two weeks ago to ask for more time, telling them: ‘I am in the climb of my life. I am climbing Kilimanjaro.’

Although she doesn’t risk losing a lot of money from the channel’s failings, Oprah’s reputation is at stake.

Over her 39-year career, The Oprah Winfrey Show had as many as 12.5 million viewers. O, The Oprah Magazine had more than two million subscribers. And her Internet site, Oprah.com, draws more than three million unique visitors a month.

Her image as the most successful TV star of her generation is on the line.

E-mails to OWN and Oprah’s production company, Harpo, were not returned yesterday.

In March i was announced that Rosie O’ Donnell’s talk show The Rosie Show had been axed by the network after only six months.

It debuted with 500,000 viewers but within days fell to half of that.