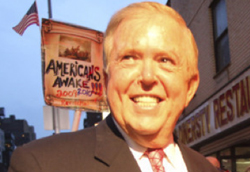 Lou Dobbs is returning to cable — on the Fox Business Network.

The network announced on Wednesday afternoon that Dobbs will begin hosting a daily program in “the first quarter of 2011.” Dobbs will also contribute to other Fox Business programs.

The Los Angeles Times was the first to report on Dobbs’ hiring.

In a statement, Dobbs said that he was “excited and feel priveleged to join the great team that Rupert Murdoch, Roger Ailes and Neil Cavuto have created, and I can’t wait to make whatever contribution I can to Fox Business.”

Dobbs will become one of the most high-profile faces on Fox Business, which has struggled in the ratings against rival CNBC. For Dobbs, it also marks a return to a business-oriented brand. He initially became famous as the longtime host of CNN’s flagship business show, “Moneyline.” In 2003, though, that show was renamed “Lou Dobbs Tonight,” and Dobbs became a politically outspoken lightning rod, due in large part to his hard-line stance on illegal immigration.

Dobbs left CNN in November of 2009, after nearly 30 years on the network. Since then, he has continued hosting his syndicated radio show, and has made several appearances on Fox News. He had talked about possibly running for political office. Now, though, he has seemingly chosen to continue his career in broadcasting.

Nicolas Cage's Return to Talk Shows Is a Chaotic Delight