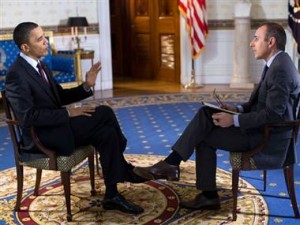 Matt Lauer stayed behind in New York today while his “Today” family was in Indianapolis ahead of the Super Bowl Sunday. Lauer will be at the White House this weekend for the annual live pre-game presidential interview.

Bill O’Reilly did it last year on FOX. Katie Couric, then with CBS, conducted the pre-game interview in 2010 arriving just ahead of that year’s Snowpocalypse. And Lauer, whose contract with NBC ends later this year, conducted an interview in 2009, a couple weeks after Obama took office, but not without some “technical difficulties.”