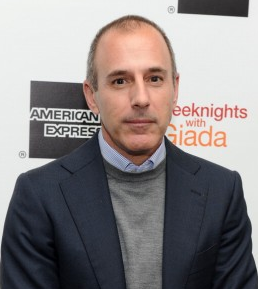 Matt Lauer is finally breaking his silence about Ann Curry’s departure from the “Today Show” and the NBC morning show’s declining ratings.

The host — who is not leaving his post, despite wrong rumors — admits in a new interview with The Daily Beast that Curry’s ouster from her co-anchor position last June should have, and could have, been excecuted a lot better.

“I don’t think the show and the network handled the transition well. You don’t have to be Einstein to know that,” says Lauer.

He continues, “It clearly did not help us. We were seen as a family, and we didn’t handle a family matter well.”

Lauer further shares that he disagreed with the show’s direction last year, where more time seemed to be devoted to scandalous, tabloid-esque stories.

“The show got a little dour and depressing and dark,” says the TV journalist, revealing that he objected to a lot of the content, but was “losing a lot of those battles.”

“Even if [the stories] popped in the ratings in the short term, they did some damage in terms of trust with our viewers,” Lauer says. ”We got drunk on it.”

And, for the first time in 16 years, “Today” fell out of first place in the ratings, with ABC’s “Good Morning America” capturing the top spot.

“In some ways being No. 2 in the ratings is a real shot in the arm, a kick in the pants,” Lauer argues. “It makes you hungrier … I don’t think it’s a bad thing to have a fire lit under your a**.”

Lauer believes things are starting to turn around, however, noting, “It’s a much more positive show, a more uplifting show. Much of the darkness is gone, by design.”

But while the job is still not without stress or controversy, Lauer says he is going to persevere.

“I’m not going to whine or get depressed. Who’s going to feel sorry for me? Nobody,” he tells The Daily Beast. “I am the luckiest guy I know.”