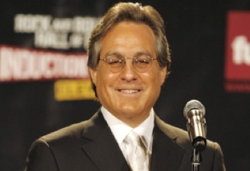 O’Brien confirmed Monday that Weinberg won’t be joining him on “Conan,” his new late-night program set to debut in November. Weinberg had been O’Brien’s musical sidekick for 17 years, on both “Late Night” and the “Tonight Show.”

“Max has been a huge part of my life for the past 17 years and he is an incredible band leader and musician,” O’Brien said in a statement. “I hope he can find time to stop by the show, sit in with the band and pretend to find my monologue funny.”

Weinberg, who’s also the drummer for Bruce Springsteen’s E Street Band, said his time with O’Brien and crew was “a deeply rewarding experience” and that he does “look forward to dropping by.”

Guitarist Jimmy Vivino will take over as bandleader, a “Conan” spokesman said. Vivino is a longtime member of the band, which was previously named “The Max Weinberg 7” and later “Max Weinberg and the Tonight Show Band.” A new name hasn’t yet been announced.

David Letterman: Why Oprah “Hated” Me