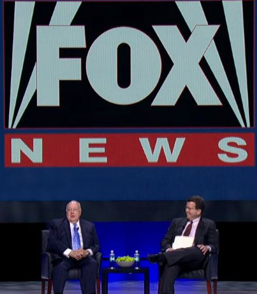 Fox News chairman and CEO Roger Ailes is being interviewed by Neil Cavuto at this hour in California at a 21st Century Fox investors conference.

The first question Cavuto asked was about the rumor, first reported on Drudge Report, that Megyn Kelly will me moving into the 9pmET timeslot this Fall. “Generally, I don’t confirm or deny any rumors, and that is a rumor at the moment,” said Ailes, adding “all of our stars will be back.”

As for Hannity, who currently hosts the 9pm hour, Ailes said, “Hannity is a brand that many of our viewers love and want to see, and, as you know, is one of the nicest guys in the building.”

Ailes did say he’s been having conversations with Shepard Smith about “a new way to deliver news.” This could mean a lot of things, including that Smith’s 7pm time slot is up for grabs.