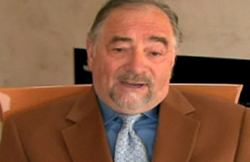 Under his contract, which expires at the end of this year, Talk Radio Networks has the right to match any competing contracts. Savage claims that Courtside Radio has offered him a superior deal, including syndication and promotion through the Westwood One network, which includes NFL football, NCAA basketball, CNN News, NBC News, and CBS News. But Talk Radio Networks isn’t letting him go, enforcing the “right to match” clause in a move Savage claims amounts to “indentured servitude.”

Talk Radio Networks “is attempting to force Dr. Savage into accepting a substandard agreement containing what can only be described as an indentured servitude provision,” Savage claims in the lawsuit. “TRN can perpetually renew Dr. Savage’s employment ad infinitum, thus completely restricting Dr. Savage’s ability to move as an employee,” the lawsuit goes on.

In a statement, Talk Radio Networks CEO Mark Masters denied any issue, claiming that he has successfully signed Savage to a contract extension and that he will hold him to his contract.

“Michael’s lawsuit against us is unjustified and frivolous,” he said. “Michael’s contract is crystal clear, and we are 100% confident that the courts will justify our position. The Michael Savage Show will remain on the air.”