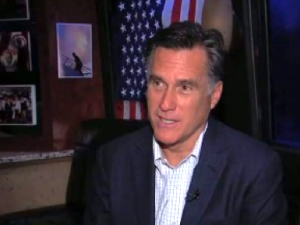 CBS says it is “his first network Sunday morning public affairs show interview during the 2012 campaign.” In fact, Romney has appeared a number of times on “Fox News Sunday,” which airs on the Fox broadcast network. It will be Romney’s first non-Fox Sunday show appearance during the campaign however.

Moderator Bob Schieffer will sit down with Romney in his campaign tour bus in Pennsylvania, where the topics of discussion will include jobs, the economy and of course the campaign.

Romney has been making more appearances on outlets not named Fox News over the last few months. He was interviewed by ABC’s Diane Sawyer back in April, and also spoke to Jan Crawford for “CBS This Morning” and the “CBS Evening News.”