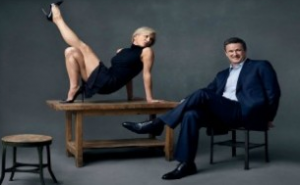 According to a report in Vanity Fair, MSNBC host and former Florida Congressman Joe Scarborough is preparing to publish a memoir which he hopes will lead to a presidential bid in 2016.

The report in Vanity Fair, accompanied by a provocative picture of Scarborough’s MSNBC co-host Mika Brzezinski, notes that the pair has flirted with a number of major career moves which never materialized.

Now, according to Brinkley, Scarborough is flirting with getting back into politics:

After the presidential inauguration in January, Joe (no fan of Mitt Romney’s—”I’ve been very critical”) plans on publishing a memoir that will serve—no joke—as a vehicle to test the waters for a presidential run in 2016. Take that, Mr. Romney.