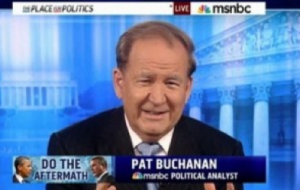 “After ten years, we’ve decided to part ways with Pat Buchanan. We wish him well,” said MSNBC in a statement Thursday evening.

Buchanan elaborated in an column with the title “Blacklisted, But Not Beaten”:

In the 10 years I have been at MSNBC, the network has taken heat for what I have written, and faithfully honored our contract. Yet my four-months’ absence from MSNBC and now my departure represent an undeniable victory for the blacklisters.

Buchanan hasn’t been on MSNBC in months. He first took time off from the network to promote his book, but some controversial sections of the book drew the ire of a number of interest groups, many of which called for Buchanan to be fired.