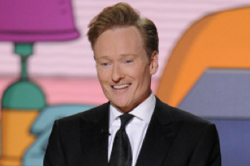 Conan O’Brien is in talks with Fox, but he won’t be allowed on the network’s biggest hit show.

The Hollywood Reporter’s Nellie Andreeva and James Hibberd report that Conan was approached to appear on “Idol Gives Back,” the “American Idol” charity special set to air on April 21. However, his exit agreement with NBC bars him from appearing on television until May 1, and THR reports that NBC said he could not appear on the charity special.

One place Conan will for sure appear is the stage: he will embark on a 30-city theater tour in which he promises audiences “a night of music, comedy, hugging and the occasional awkward silence.” The show is called the “Legally Prohibited from Being Funny on Television Tour.”

Interestingly, as Andreeva and Hibberd point out, the tour may help Conan seal a deal with Fox affiliates: his tour passes through the top nine television markets in the country, and his schedule is coincidentally open on May 17, the day of Fox’s upfront presentation to advertisers.