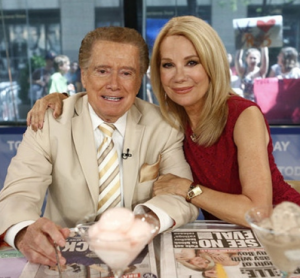 NBC execs are trying to lure Regis Philbin out of retirement by dangling a gig to reunite with Kathie Lee Gifford on the “Today” show, according to a report.

The 80-year-old Philbin, who holds the Guinness World Record for most time spent in front of TV camera, is in contract talks to join the Peacock network, Radar Online reported Monday.

Philbin could quickly find himself co-hosting the fourth-hour of “Today” with Gifford if Hoda Kotb is picked to replace Ann Curry as Matt Lauer’s sidekick on the early-morning “Today” show slot.

The Bronx-born Philbin and Gifford were a team from 1988 to 2000 on the LIVE! Regis and Kathie Lee show. Philbin continued the show with Kelly Ripa until retiring in November.

Last week, Philbin guest-hosted with Gifford on “Today” and apparently knocked the socks off NBC’s bigwigs. During the show, Philbin admitted to Gifford that missed appearing on TV.

“(They) absolutely love Regis, and want to formally sign him to became a special contributor to ‘Today’ and work with the network on entertainment specials,” a source told Radar Online.

“If Hoda is chosen to become Matt Lauer’s co-anchor, Regis would be the natural choice to replace her,” the source said.”

Obviously, Philbin isn’t hard up for money. He earned $20 million a year on “LIVE! with Regis and Kelly” and has a estimated net worth of $90 million, according to the web site Celebritynetworth.com.