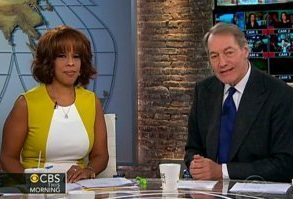 Morning show ratings were released on Friday, and as expected, NBC’s “Today” remained the number one morning show, beating ABC rival “Good Morning America” in total viewers and in the key demographic (Adults aged 25-54). Though “Today” beat its two competitors, “GMA” was the only morning show to demonstrate growth in total and younger viewers from the same week last year. Also, “GMA” continued to close the ratings gap with “Today.”

This year, CBS premiered a brand new morning show — complete with new talent and a new studio. Ratings for CBS’ new program, “CBS This Morning,” were down 10 percent compared to this time last year, but gained viewers throughout the week.

In November 2011, CBS announced that it was scrapping its then-morning show, “The Early Show,” and replacing it with a program co-hosted by Charlie Rose and Gayle King. “Early Show’s” Erica Hill stayed on to co-host the new program.

Bob Schieffer to Host ‘Face the Nation’ from Miami